The concept of greed is based off of the fact that selfishness is a negative trait.

I’m here to tell you that’s all a fallacy…

It all started one cold winter night; the city looked almost peaceful covered in a white blanket of fresh snow. Unbeknownst to the comfortable families riding out the storm behind their wooden walls, there is a loner, wandering the streets almost frozen to the point of no return. He stumbles upon a house which stands out from the rest with its broad and tall appearance. The man with his last ounce of energy raps lightly on the door, for he only needs to come inside for a minute to warm up he thought. The faint sound of annoyance is heard from inside as the lock clicks open, and a well dressed man peaks around the side of the door and asks.

“What is it you want to take from me?”

The old beggar answers, “nothing kind sir, just a minute in front of a warm flame is all I seek.”

“I see,” says the haughty man, he looks behind him and says, “well come in then, just don’t muck up the carpets they stain easily.”

The man walks in and already the feeling in his fingers starts to creep back into his frail hands. Immediately he rushes to the fireplace as he holds up his hands trying his best not to step on the rug which was lavishly strewn about in front of the fire. The owner just stares at the beggar in disgust as he takes a drag from his pipe…

So.. that was a little heavy I know, here’s a smiley face to cheer you up 😊 and 🍕 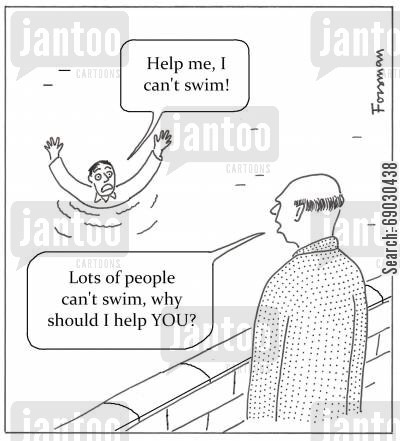 I started off saying that to perceive selfishness as negativity was wrong. Which means that there must be a reason to assume that there are positive traits within this concept.
The man in the story who let the beggar in did a kind thing, did he not? Since he let the beggar into his home, probably saving his life, then this means that positivity fueled a positive action.
No:

The actions we do throughout our lives are mostly selfish acts. Think about how good you feel when you help someone, or we are kind to another. The feelings which occur inside ourselves, are the driving factor with which our mind relies on to accomplish things on a daily basis. Without selfishness no one would be motivated to be productive or help anyone in any way, because there would be no reason to.

So what I am trying to say is that selfishness can be a driving force behind our most heroic actions. Do not be fooled by labels, the world is a 2-sided coin, use the right side.

Trying to bring out the best in an unsuspecting world. View all posts by lavlit444

2 thoughts on “Greed Will Benefit The Needy”